I wasn’t thinking about wool hats when I trekked up Prospect Mountain during a cloudless, scorching afternoon last May. The Hike for Hope, an American Foundation for Suicide Prevention event, along the paved roadway only fueled my thoughts about raisins. I embodied one: exposed, dehydrated, and shrinking rapidly.

When we finally reached the summit, I took in the view of Lake George and then headed for shade. Next to the snacks and water, the pavilion overflowed with gift baskets full of restaurant vouchers, massage packages, art supplies, coffee, chocolate, and yarn. I love raffles. I did not win a single thing. I got a cool surprise, though, because my dad did. He gifted the basket of yarn to me.

The Cascade 220 Superwash Wave was perfect for the slouchy hat I envisioned making for the students in my advisory group at NCS, but not until knitting season emerged. Sometime in October, the fireplace was back in action. I cast on. I finished the third hat during my December break from school and gathered the students for an afternoon of board games, tea, and cookies to welcome 2023.

I panic after knitting things I think young people will like, telling myself I’ve miscalculated, that they’ll reject my craftiness, politely accepting the item only to dump it in the Lost & Found a week later, hoping someone else will claim it.

They marveled at my skills and ooohed at the stitches, unable to see the imperfections, my do-overs. They wore the hats through rounds of Scattergories, Wig Out, and Chronology then exited into their evenings, thanking me for designing something original, something they wanted to show their friends later.

By the time I returned the games to the closet, wiped down the desks, and turned out the lights, snow was falling. A blast of cold wind darted through the parking lot as I approached my car. 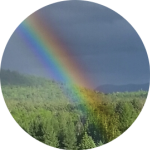